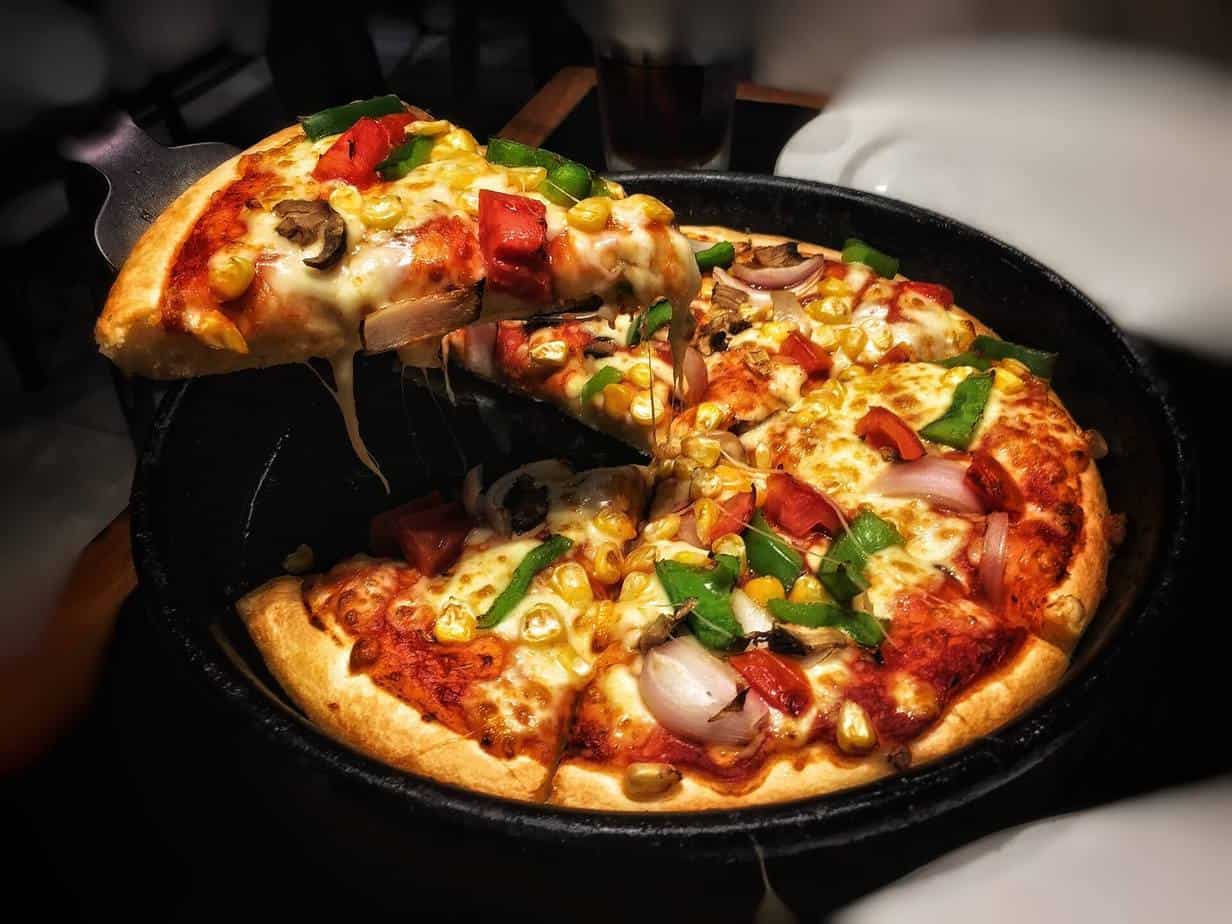 A family member, as wonderful as a dog, deserves much more than just the standard kibble. He deserves to be treated with tasty foods that shock his palate and make him/her adore you even more, after all, the way to a dog’s heart is through the stomach. So, when it comes to wonderful treats, consider pizza as the next best option. Can dogs eat pizza?

We have all experienced our dogs clawing at our feet, with their puppy dog eyes, pining for a bite of what we are having, especially when we are having pizza. But, is it safe for dogs to eat pizza? Not really. However, it does depend on the kind of pizza you feed them.

What Is Wrong With Pizza?

I am sure that by now your dog has had a taste of pizza and has exhibited immense love for the treat. Never mind this; the question I would like to ask is whether you have ever considered whether Pizza is safe for dog consumption. Just because it is safe for us, does not necessarily mean it is safe for the pup. Currently, pizza poses no nutritional value for the dog when consumed.

The delicacy contains very high amounts of fats, carbohydrates, and empty calories that aid in weight development and stomach upsets. Consequently, the ingredients used for its preparation are also dangerous to a dog’s health. According to Giordano’s, if you can monitor and ensure that the ingredients are not harmful to dogs, then Pizza can be a safe treat for your dog.

An article by Sara Ann Taylor, 2017) defines pizza as a cooked flatbread topped with cheese, tomato sauce, meats, vegetables, spices, and other condiments. It can be made either fresh or bought frozen. In its preparation, there are two parts, the making of the dough and the toppings. Each of these processes has a part to play in the maintenance of your dog’s health.

The most common pizza toppings are:

All these ingredients are used sparingly when preparing the pizza; hence, very few will pose a threat to the dogs’ health.

The Danger of Feeding Pizza To a Dog

Even though ingredients in pizza are used sparingly, a few ingredients pose serious health risks to the wellbeing of your dog.

Both garlic and onions belong to the Allium family. They both have thiosulphates and disulfides that can be toxic to dogs. According to Rita Hogan Garlic is five times more potent than onions and poses a greater threat.

Even though a large amount of garlic, ranging from 15-30g/kg of your dog’s weight, is to be consumed for toxicity symptoms to appear, many dogs can develop a slight or severe reaction to garlic and onion consumption even with small portions.

These reactions can lead to gastrointestinal issues, respiratory problems, and anemia. Therefore, ensure that your dog does not consume large amounts of onion and garlic.

This may be a difficult task considering pizza has both garlic and onions in the toppings, crust, and sauce. However, this can be solved by making homemade pizza that controls the amount of onions and garlic used in the preparation process.

Cheese is the one ingredient that holds all toppings together on a pizza. It is the one constant ingredient regardless of which pizza you order. However, an article by James Brooks, states that most cheese varieties sold in stores and used to make pizza contain high amounts of lactose and fats.

Now, even though cheese is not toxic or fatal to your dog’s health, most dogs would suffer from gastrointestinal issues, respiratory issues, and cardiovascular problems associated with the high-fat content and lactose, as most dogs are lactose intolerant.

An article by Puotinen argues that monitoring the kind of cheese being fed to dogs can allow the pup to gain certain benefits. Currently, supermarkets and other retail stores sell cheese whose milk has been ultra-pasteurized and homogenized making it inappropriate for dogs.

Puotinen states that these two processes alter the milk’s amino acids, promote the rancidity of unsaturated fatty acids, destroy vitamins and enzymes, and break and distribute fat molecules inside the milk.

Hence, when making cheese used in pizza, the dairy is already unhealthy for the dog and could trigger adverse allergic reactions and other health complications. However, Puotinen notes that when raw unprocessed milk is used in the manufacture of raw cheese, it can be safe if properly aged.

Therefore, when making pizza for the dog, ensure that the cheese being used is raw cheese made from unprocessed milk. Only then can the cheese be safe for the dogs’ consumption.

Sodium can be found in a variety of toppings and ingredients. For instance, anchovies, pepperoni’s, pickled vegetables, salt, and tomato sauce are a few of the pizza ingredients that have high levels of sodium.

This can be dangerous for your dogs’ health as the consumption of large amounts of sodium can lead to the development of gastrointestinal issues, high blood pressure, and heart disease. Your dog, after consumption of dangerous levels of sodium, may go into shock and have a train of life-long issues leading up to its death.

Even though most mushrooms are safe for dogs to consume, a few are dangerous and fatal. If you are not paying attention, or do not know the kind of mushrooms your dog is consuming or that are on your pizza, you shouldn’t offer your dog any pizza containing mushrooms.

The preparation process of pizza involves the use of various oils and grease. Even low fat pizza often has a significant amount of grease in them. With so much fat content in the pizza, this translates to increased fat in dogs. Too much fat can consumption, especially regularly, can lead to weight increases and ultimately obesity. Consuming the same in high quantities can lead to pancreatitis.

Some of the spices that are used to season pizza contain certain ingredients that can be harmful to dogs. For instance, some of the spices may contain onions, garlic, salt, cocoa powder, and nutmeg. The dangers of onions and garlic have been mentioned above. Salt increases thirst and urination that can lead to dehydration. It can also cause vomiting, nausea, and diarrhea if ingested in large quantities.

Cocoa powder, like chocolate, contains a compound that is similar to caffeine that can harm a dog’s nervous system, causing kidney and heart issues. Lastly, nutmeg can be fatal to a dog. Cecily Sailer published an article where she notes that the consumption of nutmeg has led to the death of a pup before. Hence, it is crucial to avoid it altogether.

On consuming uncooked pizza dough, the yeast in the dough is still active inside the dog’s body. It continues fermenting while in the digestive tract producing carbon dioxide and alcohol. The presence of these two components in the dog’s body makes it bloated and in some cases drunk.

What Kind of Pizza is Safe For Dogs?

If you must feed your dog pizza, then consider a homemade pizza whose ingredients are monitored and made to ensure that there is no harm to the dog. Take for instance the simple recipe for a dog-friendly pizza provided by Dr. Stephanie Flaunders Cruz, a vet and contributor to Can I Give My dog.com. Additionally, Giordano’s offers a lovely array of recipes and ideas on how to make dog-friendly pizza.

Pepperoni is not recommended as food for dogs. It contains large quantities of sodium and fat that are unhealthy for your dog. In addition to the unhealthy components in pepperoni, pepperoni pizza may contain other seasoning spices and ingredients that are dangerous and fatal to your dog’s health.

These ingredients may force the dog to develop digestive issues, salt poisoning, kidney damage, or pancreatitis. Moreover, the presence of onions and garlic in the pizza may result in the development of anemia and other respiratory issues.

Even though there is no nutritional value, dogs can eat small amounts of pizza crust; however, this depends on the kind of ingredients that have been used to make the crust. Most pizza crusts are harmless, but they do contain large amounts of calories and carbohydrates that can lead to the destabilization of a balanced diet.

In such an event, a dog may start gaining additional weight and becoming obese. The crust also has a high level of sodium that causes immediate gastrointestinal issues, high blood pressure, and heart disease.

Can My Dog Eat Bread Crust?

Yes, dogs can eat bread. According to an article by Anna Burke, plain white and wheat bread is safe for dog’s consumption only where the dog does not have any allergies.

Yes, dogs can eat homemade pizza. Or pizza that contains healthy ingredients for dogs. Monitor your ingredients and take it slow when feeding your dog pizza. We advise you to introduce it slowly and monitor the reaction and effect before making it a regular habit.

Have you ever wonder what other human foods that dogs can eat? Something like bananas, chocolaty, ice cream etc.

link to Do Black Golden Retrievers Exist? [Fact or Fiction]