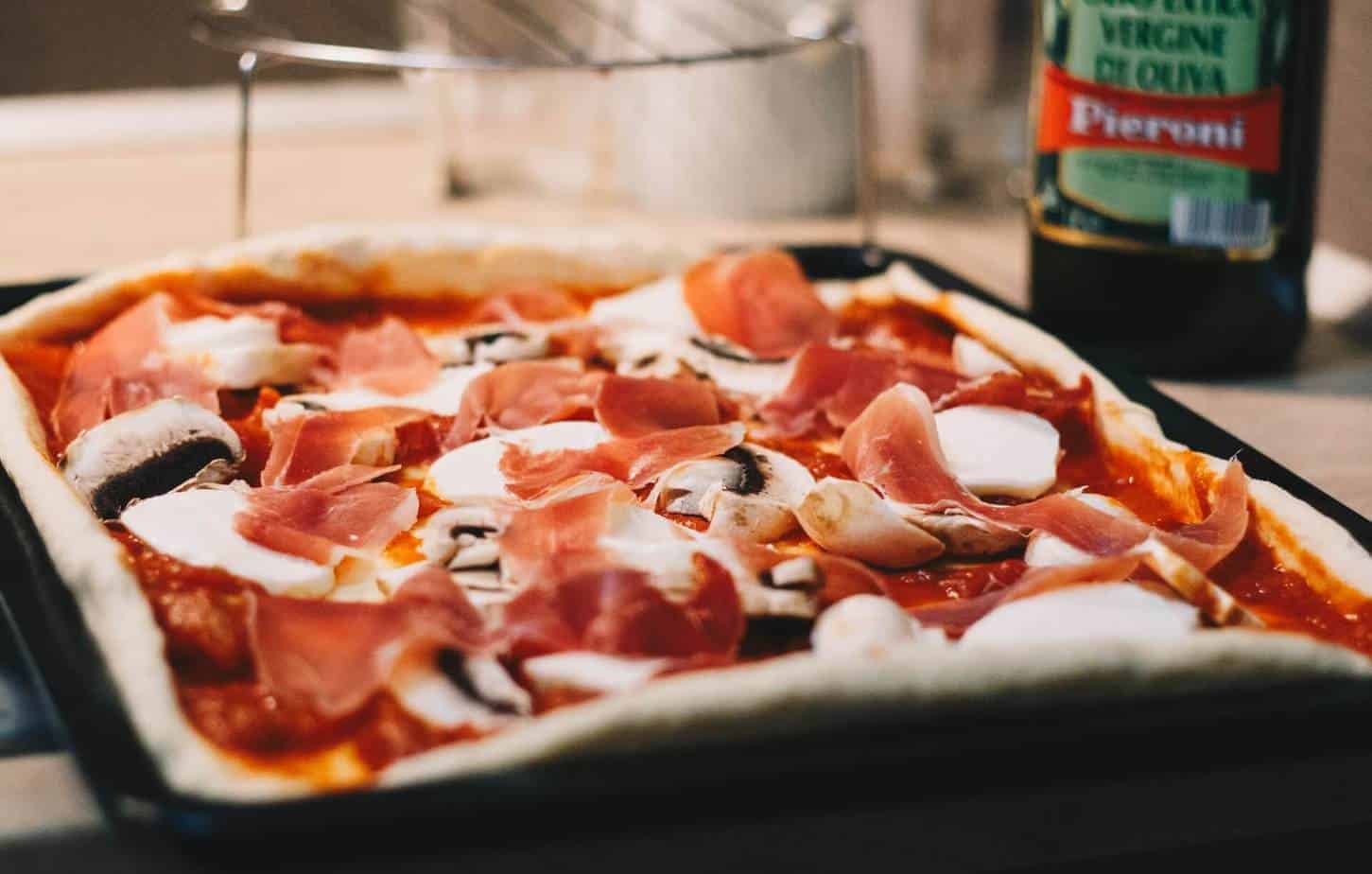 Can dogs have raw bacon? Yes, dogs can eat raw bacon, but it is not ideal for their health and many owners are advised against it. While dogs love everything meaty and jump at the first opportunity to eat meat, it is necessary to ensure the meat they consume is healthy for them.

While bacon is not toxic to dogs, it contains a lot of fat and sodium, which can lead to the development of pancreatitis. Nevertheless, when fed small portions in moderation, it can be a lovely snack for your dog.

Is It Safe For Dogs To Eat Pork?

Pork, like any other meat, is a dog’s favorite. Whether it is safe or not is a topic that many owners debate and are still in disagreement. Unlike other foods, a ruling on the safety of pork is not a simple matter.

Yes, pork is a safe food for a dog to consume; however, other matters must be considered before feeding your dog this type of meat and products that emanate from the same.

Can Dogs Have Raw Bacon?

This question was asked in DogForums.com chat room and many responses from, seemingly, dog owners were against it. Although, when given, dogs will not refuse to eat raw bacon, it is not necessarily healthy for them as it is rich in sodium and saturated fats.

A salt-rich diet is not healthy as it promotes dehydration and other issues when taken consistently in high amounts.

Moreover, bacon is meat that has been cured using nitrates and nitrites to ensure that it has a longer shelf life. These added preservatives also spell out added health issues for your dog.

What Are Nitrates And Nitrites?

In an interview with Tamar Haspel, Jeff Sindelar, a professor of meat science at the University of Wisconsin at Madison, defined nitrates as molecules that consist of one nitrogen atom and three oxygens. They can easily be converted into nitrites, a nitrogen molecule with two oxygens, using an enzyme from bacteria.

When nitrite comes into contact with protein, it is converted into nitric oxide which does the curing process and gives the meat a healthy pink color.

According to Jeff Sindelar, nitrite, regardless of whether it is derived from sodium or vegetables, is nitrite. The only difference is that sodium nitrite levels can be monitored whereas nitrite levels derived from celery cannot. However, both types promote the same type of health complications in dogs.

The Danger Of Raw Bacon

When a dog consumes raw bacon in large amounts, it may have persistent diarrhea and vomiting in the short term, however, in the long term your dog may develop the following health complications:

It can lead to Pancreatitis.

The Pancreas is extremely important as it controls how good the digestive system can digest food through the production of certain enzymes, including insulin used to break down fats. When a dog consumes bacon that is rich in saturated fats, the pancreas is unable to break down all these fats they develop pancreatitis (an inflamed pancreas). The dog may have symptoms such as:

With large consumption of raw bacon regularly, your dog risks developing Chronic Obstructive Pulmonary Disease. In an article by Krista Williams and Cheryl Yuill, obstructive pulmonary disease is defined as a condition affecting the pulmonary or respiratory system obstructing airflow in the arteries and veins.

Symptoms of this disease in dogs include:

Raw bacon is rich in saturated fats and calories. With large consumption of these components, the pancreas’ ability to break down all the fats through the continuous production of insulin, is inhibited.

At this point, the dog is unable to digest all the food it consumes, including sugars and fats into energy, and ends up storing the fats in certain areas of the body. The dog starts suffering from weight issues as it increases in kilograms. If the diet is not balanced, the dog can suffer from weight issues leading to obesity.

Due to the lack of a balanced diet and increased fats in the body. These fats may build-up on the walls of blood vessels (arteries and veins) preventing blood flow leading to cardiovascular disease.

According to Anna Burke, the Thyroid gland is a body organ responsible for the production of certain hormones that affect all aspects of body metabolism, especially body temperature and heart rate. When the thyroid gland is unable to produce these vital hormones, the dog’s metabolism slows leading to hypothyroidism.  Symptoms of the disease vary from dog to dog, but they include:

Uncured bacon is preserved using a mixture of celery and sea salt, among other flavorings such as parsley and beet extracts. Celery contains natural nitrates that are thought to be better than processed nitrites.

However, as Tamar Haspel very well put it in her article, “The ‘Uncured’ bacon Illusion”, uncured bacon is actually bacon that has been cured with nitrites that have been derived from celery, beets or other vegetables and fruits that are naturally high in nitrates.

The Danger With Uncured Bacon

The following are some of the reasons why uncured bacon is bad for your dog.

When these nitrites are exposed to high temperatures, they can be converted into nitrosamines that are considered to be carcinogens (substances that promote the growth of cancer cells).

Anna Burke in her article “Can dogs eat turkey bacon?” argues that even though turkey bacon is derived from dark and light turkey meat, it is seasoned the same way pork bacon is and holds fewer vitamins and minerals compared to pork bacon.

But, provided you feed your dog very small quantities of bacon, and not regularly, then it is safe for a dog’s consumption. However, if turkey bacon is to comprise higher than 10% of your dog’s entire diet, then it is not healthy and should not be fed to dogs.

No, dogs should not be allowed to eat bacon grease. It is rich in fats and salts and should be avoided at all costs. If your dog happens to consume a little grease off the floor, then there is no risk; however, continuous feeding of bacon grease can open the door for many health complications.

From obesity, cardiovascular disease, hypothyroidism, chronic obstructive pulmonary disease, cancer among other health issues. If your dog has taken a large amount of bacon grease, be on the lookout for the following symptoms and visit a vet as soon as possible:

Eating raw or undercooked pork is not safe for dogs. Trichinosis is an infection that occurs when a dog eats the muscles from raw pork meat infected with the larvae parasite trichinella spiralis (roundworm).

This parasite invades the dog’s intestines causing diarrhea, vomiting, abdominal pain, vomiting, elevated fever, lethargy, muscle inflammation, pain, and stiffness among other symptoms. However, if your pet has a weaker immune system, it will experience more severe symptoms than those listed above.

Additionally, raw pork is also rich in a type of fat that is difficult for dogs to digest. This difficulty can lead to the development of indigestion, and inflame the pancreas (pancreatitis).

No. Just like raw bacon, cooked bacon is as dangerous and should not be fed to dogs. It is incredibly rich and fatty and poses the same threats listed above for raw bacon. Moreover, cooked bacon has been exposed to high temperatures and would, therefore, have the added risk of containing nitrosamines, therefore exposing your dog to cancer growth.

Maybe. Although ham is rich in sodium and fats, given in small quantities and rarely, it can be a good healthy treat for your dog. However, when given in large quantities, it can lead to health complications associated with the presence of high levels of sodium, nitrites, fats, and calories in the body.

Caution: Do not give your dog ham bones. Just like raw pork, raw ham bones can contain salmonella and other bacteria that are harmful to dogs. If, after your dog eats a ham bone, they show signs of constipation, call your vet immediately.

Thank you for stepping by if your interested in other humans foods that dogs can eat such as bananas, eggs, garlic, ice cream , pizza feel free to check out our other articles.