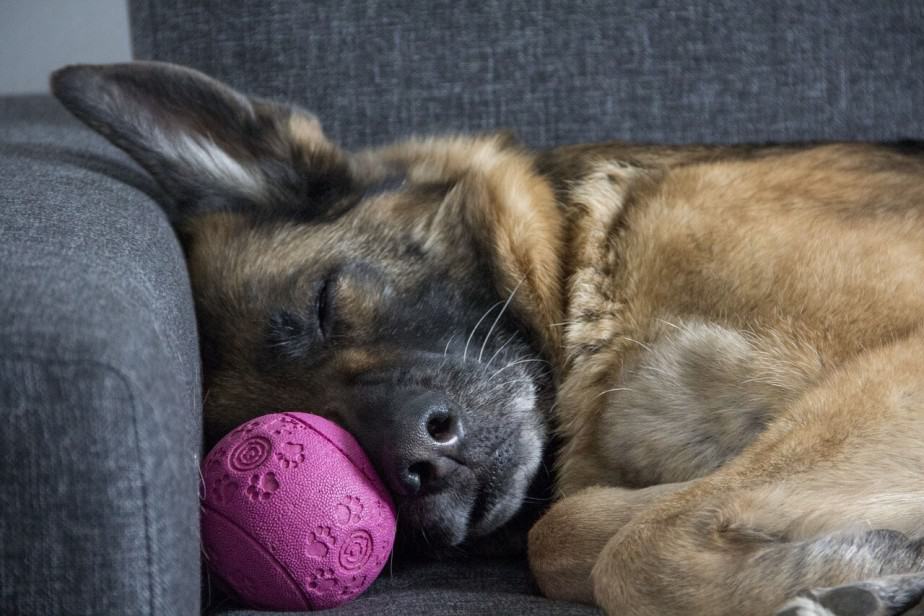 Sleep is the body’s natural way of rejuvenating its energies. While asleep, your body can fix what has been injured or depleted, improving your mind, health, and general wellbeing.

This is not only true for human beings but also for German Shepherds. But how much should a german shepherd puppy, adult, or senior sleep?

You may have a German Shepherd that is quick to nap and you may have one that looks like it is a night owl. Whichever the case, learning about a German Shepherds’ sleep cycle and why your puppy may not be sleeping well should be a concern for any owner.

Importance of Sleep to a German Shepherd

German Shepherds are some of the most active and energetic dogs. They are highly intelligent maintaining a strong reputation as loyal and protective dog breeds. Initially bred as herding dogs, they portrayed strong guarding and protective instincts and have over the years become the preferred guard, guide, military, police, search and rescue dogs. What a resume!!!!

But to have all these possible, German Shepherds have to be in tiptop shape. They have to be trained, fed, protected and constantly shown attention.

Adults German Shepherds sleep for 12-14 hours each day. Due to its guarding and protective nature, you may find an adult German Shepherd sleeping lesser hours due to how active it is during the day. Additionally, the need to protect forces the German Shepherd to remain alert; hence, they end up becoming light sleepers.

Why does my German Shepherd sleep so much?

You may be wondering why your German Shepherd sleeps a lot.  Several reasons could explain this behavior. They are listed as follows:

German Shepherd puppies sleep for 18-20 hours a day. This allows them to grow well, developing a healthy immune system, bones, and muscles.

Senior German Shepherds sleep for 16-20 hours. Their body organs are slowly deteriorating and they are becoming less and less energetic. At this age, German Shepherds tire out more quickly and end up sleeping more often.

The current temperature can also greatly affect how much a German Shepherd sleeps. German Shepherds were initially bred to thrive in cold environments hence why they have double coats.

However, in regions where the weather is hot, German Shepherds become sleepy sleeping for more than 14 hours a day.

If you live in a warm or hot area, ensure your German Shepherd has access to shade, cool areas, and water throughout the day. Also, ensure that you take your German shepherd on walks when the sun is not directly overhead.

When a German shepherd is sick, it can also sleep longer than it is used to. If you notice that your German shepherd sleeping suddenly, more often and exhibiting certain behavioral changes, such as being lethargic, it is likely they are sick. Check-in with your vet if you suspect this.

German Shepherds sleep because they are bored. With such an active and energetic personality, German Shepherds need a lot of physical and mental stimulation throughout their day. They also require a lot of attention from their owner.

When German Shepherds are not mentally stimulated, they can easily get bored and sleep more often. You must consider increasing the number of activities that your German Shepherd is exposed to in a day.

If it is a puppy, limiting the amount of exercise is critical for its growth as it can end up hurting its joints.

The diet you are feeding your German Shepherd also contributes to how long it will sleep in a day.

Research on the best German Shepherd diets to follow to ensure you do not end up giving your pup an unbalanced diet.

Yes, German Shepherds can have sleeping problems if their state of mind is affected. Certain mental conditions or diseases could lead to the development of sleeping problems. These include:

Rapid Eye Movement (REM) Sleeping Disorder – German Shepherds with REM sleeping Disorder are physically active in their sleep. They often act out the dreams they are experiencing with vocal sounds, sudden violet leg movements, twitching, and other bodily movements. In extreme cases, the German Shepherd can attack objects violently and run wild. When they wake up it is as if nothing happened and they continue with their life as normal.

Sleep Apnea – German Shepherds sleeping patterns can be affected by Sleep Apnea. This is most common in obese German Shepherds whose airways have been narrowed by fat deposits. Such dogs will often snore loudly to the point of being startled by their own snores. They will wake up sluggish and tired. In extreme cases, Chronic Sleep Apnea can be fatal where the dog is unable to breathe properly when asleep.

Insomnia – When German shepherds have certain health and mental issues, such as depression, stress, flea infestation, anxiety, chronic pain, and pent-up energy, they may experience insomnia.

Narcolepsy Sleep Disorder – It is a sleeping disorder that causes a German Shepherd to suddenly collapse and sleep when it is excited or during physical activity. The German Shepherd does not experience any pain.

This is one of the weirdest and hilarious positions to find your German Shepherd taking a nap. The legs are usually suspended in the air, and the dog practically looks like it is playing dead.

Finding your German Shepherd sleeping in this position could mean one of three things:

A German Shepherd sleeping on its side normally has its paws outstretched before it. This is one of the most common sleeping positions for German Shepherds and is evident when the dog wants to stretch its legs so that they are more relaxed.

Also, if you find them sleeping in this position, it signifies that the dog is feeling comfortable and safe in that environment.

This is also one of the weird positions you may find a German Shepherd sleeping, especially where the pup chooses to cuddle up in a small space, such as a basket or box.

Typically, your German shepherd sleeps in this position to keep warm. You will often find the puppy curled up this way in colder months.

Sleeping on its front

This is one of the most natural sleeping positions for German shepherds. It is a position that allows them to stay alert and attack in case of anything. This position gives them an added advantage as they can quickly rise to their feet and charge.

Tail wrapped over its nose

This position is not as common. A sleeping German Shepherd will want to protect the most exposed part of its body, being the nose, from any injuries or flying elements. You will find a German Shepherd sleeping in this position during seasons where the weather is harsh, for instance when it raining, snowing, or windy.

Picture a Kangaroo sitting down. . .  Yes, this is a legitimate sleeping position for a German Shepherd. It is hands-down, one of the weirdest and uncommon sleeping positions. The pup sits on its tail with its hind legs stretched before it, and the upper body rests either on a wall or back of a chair supported on either side. Such a position just shows how comfortable and safe your dog feels. Also, it allows the pup to cool off.

Where should a German Shepherd Sleep?

Now that we have covered the reason a German Shepherd sleeps and its sleeping habits, let us talk about where it should sleep. We all know that a good bed or sleeping structure highly contributes to how well we rest. Is this true for Germans Shepherds as well?

Yes, providing a safe and comfortable environment where a German Shepherd sleeps is important. Most German Shepherd owners provide a doggie bed; however, this is not enough. Ensure that the bed is placed in a suitable location.

Place the doggie bed in a location that not too hot. Also, ensure that the dog has access to clean water from where it sleeps. This will give the dog a comfortable sleeping environment.

A German Shepherd enjoys sleeping on its owners’ bed for several reasons:

German Shepherds have very strong protective instincts. This is why your pup will often bark and whine continuously when you are leaving or when they can’t see you.

They have very strong protective instincts and will get very anxious if they cannot see you because they can’t protect you. At night especially, they would rather sleep next to you and protect you, than in the other room.

Genetically, German shepherds were bred as herd animals. They will want to spend every waking moment with members of their flock.

As a member of its flock, expect the German Shepherd to get quite anxious and angry when you leave it behind. This is why it is attached to you and may also want to sleep in your bed at night.

They are trained to sleep next to people

Your German Shepherd may have been trained to sleep next to people as a puppy.

If you allowed your German Shepherd to sleep in your bed, or if its previous owners allowed the pup to sleep with them, then sleeping with you even in old age is normal.

Your German Shepherd sleeps next to you for warmth. This is the most likely reason for their behavior.

A Healthy German Shepherd will get its beauty sleep, and most times, the sleeping position will communicate how comfortable, safe, and rested the dog is. However, if the pup is battling any sort of health condition, whether mental or physical, sleep patterns may likely be affected. You may find that your German Shepherd sleeps less or more depending on the kind of illness it is battling.

Therefore, if you want a healthy German Shepherd, be sure to check on its habits and conditions. Ensure you provide the most comfortable option for the pup, be it sleeping on its own bed or yours.