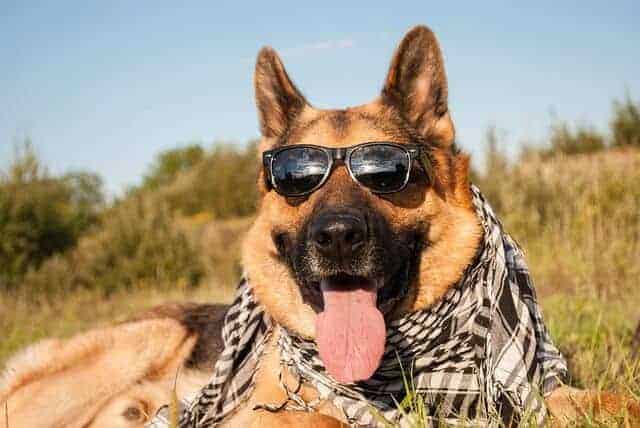 What age do German Shepherds Stop Growing is a question that most GSD owners have. German Shepherds are big, strong, and powerful animals. Their natural guarding, herding, and protective instincts have catapulted their need in both homes and work environments.

They are the chosen military, police, guard, guide, and search and rescue dog, wielding a lot of power, intelligence, and energy by the time they reach full maturity.

When you bring home a German Shepherd puppy, it may not look like the furry baby will become all these things listed above, but as your German Shepherd clocks 1 year 6 months to 3 years, it will have attained its adult body.

Check out the Xdog Weight & Fitness Vest for Dogs

As a German Shepherd owner, you may have an idea of how your cute and cuddly puppy will grow up to be, but, it is important to gauge just how quickly it will reach its full adult size and when the German Shepherd will stop growing.

If you are looking for information on whether your German Shepherd has the right weight and height, is passing the right milestones, when it becomes an adult, and ultimately, when the German Shepherd stops growing altogether, then you have come to the right place.

What is the growth process for a German Shepherd puppy?

Stages of a German Shepherds Development

When you first get a German Shepherd puppy, it is small, furry, cuddly, and very fragile. The puppy is yet to start growing out to become the powerful, strong, and energetic German Shepherd that many people are accustomed to.

To ensure that the puppy makes it to that stage, it is important to understand the growth path (developmental stages) the puppy will undertake and what is expected at each stage (milestones). Alexandra Animalso gives five stages of puppy growth as explained below:

At this stage, the puppy has just been born. It is completely helpless and fully depends on the mother to feed, warm, and help them get rid of their waste. As a German Shepherd owner, look out for the following milestones:

After all milestones in stage one have been accomplished, the puppy moves on to stage two which takes place between the third and twelfth weeks of their life. At this stage, they begin to discover the world around them and become fascinated with what lies beyond their comfortable home.

To ensure the puppies become sociable in the future, make sure they are introduced to humans and other pets at this stage of their growth. Also, make sure that they are still being weaned by their mother. If they are separated at such an early age, they may have problems socializing with other dogs in the future.

What do you expect the puppies will achieve at this stage?

By the end of the 12th week, their ears will begin to stand upright

Mentally, the puppies will not show any further signs of development. By this time, they have attained most of what they need to survive the world. But, if you want to train your puppy, then ensure you start puppy classes near the end of this period.

On the other hand, they still have a long way to go physically, so this stage is marked by physical growth. Expect the puppy:

By this point, the German Shepherd has started looking like they are just on the cusp of adulthood. As the name suggests, they reach sexual maturity between the 6th and 16th months of their lives.

They mostly look like adults, but the path for the German Shepherds to stop growing is still a long way away. The milestones to be attained include:

At the end of the 16th month, the German Shepherd puppies will have developed strong pack bonds

At this stage of their development, a German Shepherd owner should consider spaying or neutering the puppies; otherwise, they will start mating. The female German Shepherds start having heat cycles.

Therefore, if you intend to keep the dogs for breeding, ensure that they maintain good hips and overall body form so that the breed is improved.

When your puppy makes it to this point, then they have completed all the major milestones. However, do not be shocked if they continue growing physically, they are yet to attain their full adult body. By the end of the third year, however, the German Shepherd will have attained full maturity.

The German Shepherd will stop growing from 36 months moving forward. When your German Shepherd reaches this stage, ensure its diet is well maintained to foster a proper growth rate allowing the puppy to reach its adult weight by the end of the 36th month.

How do I know if my German Shepherd is healthy and growing well?

One of the reasons German shepherds are such a delight is their unique size. Many German Shepherd owners are keen to see that their puppy meets all the milestones at each stage until the German Shepherd stops growing, so how can you tell if your German Shepherd’s size is not over or underweight?

According to Alexandra Animalso, studying the weight a German Shepherd puppy should attain by the time they reach a certain age gives you a better understanding of whether your German Shepherd is healthy and still growing.

How do I know what weight is appropriate? . . . Study the German Shepherd Weight Chart

Sometimes, the weight of a baby determines whether they are healthy or not. Similarly, the weight of German Shepherd at different stages of their development gives a rough overview of the puppy’s health state.

Ensuring that your German Shepherd is a certain weight by a certain age is a good indication that your puppy is growing up healthy and well. Below, we have provided a weight chart, which shows the exact age and weight a German Shepherd should have on their path to adulthood.

Both male and female German Shepherds do not grow at the same rate. Typically, male German Shepherds will grow faster than females. However, females are normally not too far behind. As long as the weight difference remains close, then do not worry. Also, ensure to study the right chart based on the gender of your dog.

How heavy are Male German Shepherds? . . . With a Weight Chart Guide

How heavy are Female German Shepherds? . . . With a Weight Chart Guide

Other ways to check your dog’s growth?

A male German Shepherd will stop growing tall when they are three years of age. Before this point, they will have attained certain milestones of height growth till they reach the adult height of between 24-26 inches.  You can check their growth track and the milestones they should be accomplishing at each growth stage using the following height chart.

Sometimes they go above, sometimes they are under, but the key is to ensure that the disparity is not too low or too high indicating that the dog is under, overweight, or has height complications. If you notice such a disparity, consider seeking help from a certified vet.

Again, as the owner of the pet, you are in the best position to determine whether your pup needs additional assistance or not, so make decisions wisely.

When does a German Shepherd stop Growing?

The comparison between the growth of a German Shepherd puppy and that of a baby is eerily similar. A German Shepherd typically attains its full adult body at 18 months, but its growth process does not stop there. The German Shepherd stops growing past the age of 3.

Why does a German Shepherd stop growing?

They contain cartilaginous regions where new tissue, which is flexible and pliable, can be created. As your German Shepherd grows, the growth plates create new tissues that harden to become bone once the German shepherd reaches maturity.

These growth plates start closing by the time 18 months elapse and fully close by the third year of the German Shepherds life. At this point, you can confidently state that your German Shepherd stopped growing because the bones are no longer being created.

German Shepherds are beautiful creatures who make lovely house pets. Growing up with one is a delight and can bring immense joy to the family.

Clearly, by the time your German Shepherd stops growing at the age of three it has surpassed tremendous physical and mental milestones to get there, so congratulate the pup and celebrate it for the patience and effort it has taken to go from childhood to adulthood.