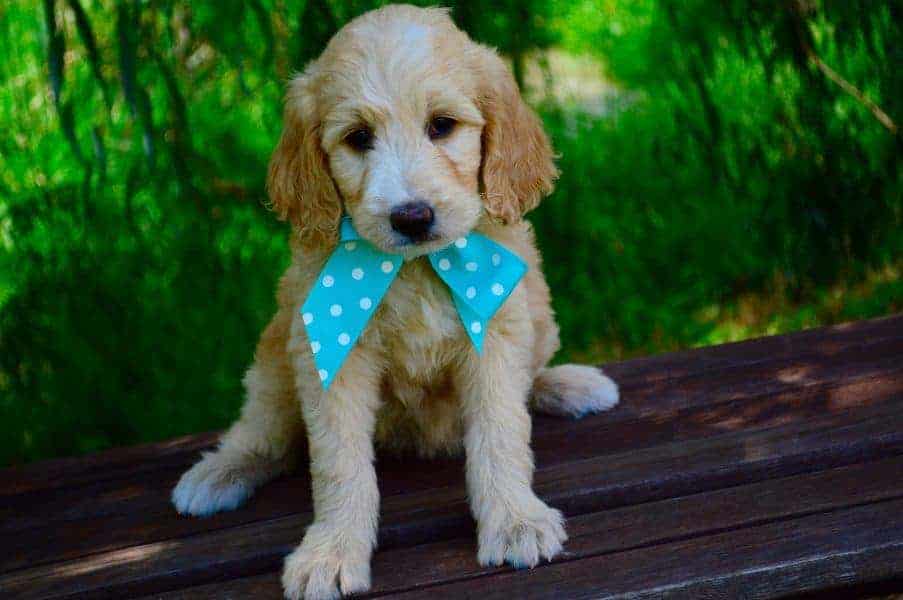 In this post, I will share everything about the Miniature Golden retriever, their lifespan, their shedding, their cost, their height, and also their size when they are fully grown.

By the end of this post, you will have everything you need to decide whether a mini retriever is worth it.

What are miniature golden retrievers?

Yes, the mini golden retriever exists they are a crossbreed between a Golden Retriever and a Mini Poodle and sometimes Cocker Spaniel.

The breed was founded in 2003 when breeder Kathy Burgess bred what was called a “Comfort Retriever,” which was a Standard Golden Retriever crossed with a Cocker Spaniel.

Is mini a golden retriever

The mini golden is mostly a mixture of Golden retriever and miniature poodle or the cocker spaniel.

Most families with small dogs tend to enjoy more time with them than those with big dogs this is also another reason why a mini golden is a good choice family dog.

The mini golden retriever makes the best family dog, especially for new dog owners. If you are a new dog owner, this is the best dog to buy. The mini retriever is loyal, happy, jumpy, active, and very good for the family.

No, Mini golden retrievers are not hypoallergenic. They generally moderate shedder however they are not good for people with allergies.

How big are mini golden retriever

Miniature Golden Retrievers are bred to stand between 14 and 20 inches at the shoulder, and they should weigh between 20 and 45 pounds.

The Standard Golden Retriever, in contract, stands 20 to 24 inches at the shoulder and weighs between 55 and 75 pounds.

This smaller version opens the door for more people to have a friendly family-oriented Golden Retriever, especially because some people are not able to manage a larger, heavier dog.

These dogs are not inexpensive. They can cost from $700 to $6,000. Despite that, many people think they are worth it because they are lovely dogs.

If you’re looking to purchase one you can get a Miniature Golden Retriever from C and S Ranch, one of the leaders in creating this breed. Here are a few more breeders that have different types of Mini Golden Retrievers.

Where to buy a mini golden retriever

Benefits of having a mini golden retriever

In addition to producing a smaller dog with the same great qualities of a Golden Retriever, designer breeds are popular because they balance the qualities of both parents.

Mini Golden Retrievers have a lot in common with Standard Goldens in terms of grooming, exercise, and temperament. However, they are smaller, and the minis can vary in appearance depending on which genes they get from each parent.

Four things you should consider having for your Mini Golden retriever, you will be surprised how cheap some of these products are on Amazon.

Anti Barking Device that works through walls ( Check our review)

Their goal is to create a breed of Golden that is 14 to 18 inches at the shoulder and between 20 and 45 pounds in weight.

Why Are Poodles Used In The Creation of The Mini Golden

That said, they will still shed some, so you will need to brush your Mini Golden every day.

Some people think that crossing dog breeds are bad for purebreds, but there are also a lot of people who disagree.

Mini Golden Retrievers are not created by taking unusually small Golden and reducing the size of the breed; they are a mixture of two different breeds of dog.

The resulting puppy has a similar look and temperament to the Standard Golden, but it is a new breed of dog.

Responsible breeders always put the health and wellbeing of the dogs first, so these puppies are bred to be healthy and strong.

Although breeders are working on a standard for the Mini Golden Retriever, there are different cross breeds out there that are effectively creating a small golden retriever breed.

The most popular choices for crossing are the Poodle and the Cocker Spaniel, but there are other options as well. Take a look at the following:

Breeders use a golden coated Cocker Spaniel for this cross to achieve the normal Golden Retriever look.

This mixture is also called the Dakota Sport Retriever, and they often have long golden hair, floppy ears, and wonderfully expressive and kind eyes.

This cross is bred from a Golden Retriever and a Poodle. These two breeds do look different from one another, so the offspring may more strongly resemble one or the other parent.

If they resemble the Poodle parent, they are called a Goldendoodle.

Because they have some, they are not simply a small version of the Standard Golden: rather, they are a new breed where Goldens are crossed with Poodles and Cocker Spaniels to bring out the best qualities in each.

The result is an intelligent and loving family dog that is a manageable size.

Recommended products for Mini Golden retrievers. You will be surprised at what fruits and vegetable dogs can eat on this list. Other recommended gear and dog accessories that you can find them on Amazon.

We recommend these things which you can check their latest prices on Amazon.