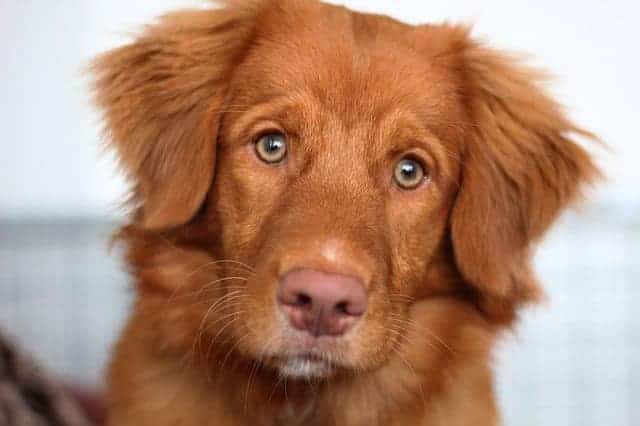 It is important to emphasize that this breed is just as impressive as the one considered the purest of the golden retrievers.

However, there are some things you need to be aware of,

In this article we will share some important breed information to help you understand better the red Golden retriever.

Although it is true, over the years and especially with regard to the highly prestigious dog competitions, it has been that very beautiful mahogany tone that has left them a little marginalized.

Even depriving them of certain recognitions for the simple fact of not sharing the same color of fur as the traditional golden. Despite the proven fact that they do share the genetics.

Below we will explain in detail the history of this race and the most outstanding features of its personality.

The history of this breed is irremediably linked to that of the original golden retrievers, therefore in order to understand the origin of one must mention part of the other.

The now-famous and known worldwide as “Golden Retriever” has its origin in mid-19th century Scotland, when the noble Dudley Marjoribanks wished to have a dog with all the qualities necessary for hunting and to survive the inclement weather of Scotland.

Over 50 years he designed a dog that united all those characteristics, giving rise to the one we know today as one of the most loyal dogs, with a long and thick coat of golden tones and an innate skill for hunting and smell.

The world premiere of this breed was in the 20th century with its arrival in the United States, thus becoming the perfect dog for any American family.

But at what point in history did the birth of the first Red retriever take place? It is estimated that the first proof of the existence of this breed was around the ’50s, although many claim that the dogs with the red coat have existed since the beginning of the breed.

It is stipulated that it was from that year that the specimens appeared with a more mahogany tone, fruit of the crossing with the Red Setters that have that characteristic reddish tone.

Once you know the origin of this breed, the next question that may arise is whether it physically presents many more differences from the Golden Retrievers.

And the truth is that no since apart from the obvious difference in color present in their coat, the other physical features between both variants of the breed are very similar.

Its beautiful fur is dense and shiny, also needing much daily care of hygiene and brushing to keep it nice and healthy.

In terms of size and weight, there are no big surprises either. They can normally reach 65 to 75 pounds and a height of approximately 22 to 24 inches.

These data will always depend on the characteristics of the parents and whether it is a female or a male, usually the smallest females.

The main difference that we can find is in its complexion and agility, being the red golden retriever puppies lighter and longer legs than the golden ones.

This makes the red retrievers more graceful and with a better predisposition to physical resistance over the years. They are graceful puppies and longer than tall, but as robust and elegant as golden retrievers.

This difference, explains breeding experts, is because since the beginning these dogs were trained for hunting and sport, thus developing a physique that allows them to better adapt to those activities.

We all know the wonderful temperament of golden retrievers, being kind, loving, and familiar.

Well, the Red Golden Retrievers are exactly the same, although even those who say they are even more helpful and friendly than their homonyms.

The red retrievers are patient dogs, very easy to educate, and perfect playmates for children. They have a perfect temperament, you will seldom see him lose his calm and will receive visitors in a courteous and kind way, no barking or scenes of jealousy.

The red golden retrievers may have a lower guard dog instinct since their athletic nature will invite them to do more sport and to be in continuous movement. They are perfect for sportsmen looking for an adventure partner.

Luckily, they also have a quiet side that allows them to be in perfect silence and rest for hours next to their owners. Just as long as he’s been burning energy for a couple of hours before, he’ll sleep like a baby while you do other chores.

The average lifespan for a Red Golden Retriever is about 10 to 12 years.

Being such a pure race and with such strong genetics, it is common to see its life expectancy reduced, since the purer the race, the more diseases it tends to develop.

However, all these statistics can vary depending on each case, being really important the diet, the exercise, and the care we give to our ret retrievers.

It is a breed that from the age of 6 tends to gain weight and reduce their mobility. Stimulating exercise and a light diet will help deal with that problem.

However, you should also know that this breed naturally tends to develop certain diseases, including hip and elbow dysplasia, hypothyroidism, retinal atrophy, and bone cancer.

In conclusion, a red golden retriever network will be a faithful companion that will fill your home with love and fun. Without a doubt, a beautiful and unforgettable dog that will delight the whole family.